Guide to BC Riesling

Riesling to the Rescue

I woke up in a thick fog. It was a bright, sunny morning in Squamish, BC, but I was paying for the night before in a bad way. That’s what happens when a group of eight chefs, sommeliers, and winemakers get together for our annual guys’ golf trip.

I wandered towards the kitchen, following the scent of a small army’s worth of bacon. A hearty breakfast was just what I needed after a night of blind tasting a bunch of awesome local and international wines, plenty of beer, and two-inch thick ribeye steaks.

One of the guys was putting the finishing touches on breakfast by smothering creamy hollandaise sauce over some perfectly poached eggs. I rummaged through the fridge for something to take care of the serious case of dry mouth I had going on. That's when I found it. Sneakily hidden amongst a slew of beer cans, tucked behind the milk, was a half-full bottle of Riesling. YES!!!

In the wine industry we often refer to Riesling as “breakfast wine” because you could (or should) have it for breakfast. It's seldom (at least in my case, I drive a tour van for a living) that we actually have the opportunity to have it with breakfast.  I was on vacation, so I took full advantage of this golden opportunity and poured myself a glass.

I love Riesling. Can you tell?

But if I had a dollar for every time I hear “I don’t like Riesling, it’s too sweet,” I would… Well, I would buy myself a whole case of Riesling.

Maybe you avoid Riesling because you dismiss it as a sweet wine. Or maybe you’ve already discovered the wonders of Riesling but you’re having a hard time convincing your friends to share a bottle.

All too often, when I bring people on wine tours, they’re pleasantly surprised to find a Riesling that they like - or even love. I believe that the more you learn about wine, the more you appreciate what’s in your glass. Riesling is no exception.

Give Riesling a chance!

The truth is, Riesling is lovable because it comes in so many styles. Every winemaker crafts a different expression of Riesling and each bottle is a glimpse into that vision.

The best examples are crisp and refreshing, focused and intense, with a mouthwatering acidity that makes you thirsty for more. Look for Rieslings that are super aromatic, like they’re ready to jump out of your glass!

Riesling can be bone dry, lusciously sweet, or everything in between. Its aromas and flavours vary significantly depending on where it is grown, when it is picked, and the age of the wine in your glass.

It’s generally lower in alcohol than many other wines. This is good news, because it means you can drink more of it!

Riesling is one of the most age-worthy white varietals, due to its high acidity and, in the case of sweeter styles, its sugar content. Both of these factors act as natural preservatives in the finished wine. As Riesling ages, it tends to become more complex. It can develop different layers of flavours and aromas such as notes of honey, beeswax, and orange marmalade. Wet stone, mineral, and even petrol (the British word for gasoline) are other common descriptors.

As strange as it may seem, many Riesling lovers find this petrol aroma delicious and fascinating, myself included!

For me, Riesling is one of the top grapes grown in the Okanagan and Similkameen Valleys. And I’m not the only one who feels this way: In the recent Judgement of BC Wine Tasting, Riesling was put head to head against some of the top international Rieslings available for sale in BC.  They showed very well!

The Okanagan and Similkameen Valleys are outstanding areas to grow Riesling grapes, mainly because of our latitude. Sitting just shy of the 50th parallel north means the Okanagan is one of the world’s most northerly wine regions. Our latitude is comparable to those in France’s Alsace, Germany’s Mosel and Rheingau, and Austria’s Wachau, regions that arguably produce the world’s best Rieslings.

Our growing season is short but hot. We get seriously long days in the peak of our growing season. Many vineyards face the sun from 5:00 AM to 9:00 PM, soaking up around two more hours of sunlight per day than vineyards in the Napa Valley!

The vineyards also benefit from large diurnal temperature shifts, which is the difference between the warmest temperature in the day to the coolest temperature at night. Riesling loves this because cool nights enable growers to maintain Riesling’s hallmark acidity!

If you’re still not convinced, here are some outstanding BC Rieslings that will change your mind.

Try These Top BC Riesling Producers

These are just a handful of amazing producers of BC Riesling. There are plenty of great Rieslings made here in the province, but for the sake of keeping this post from becoming a novel, I've narrowed it down to my top six. 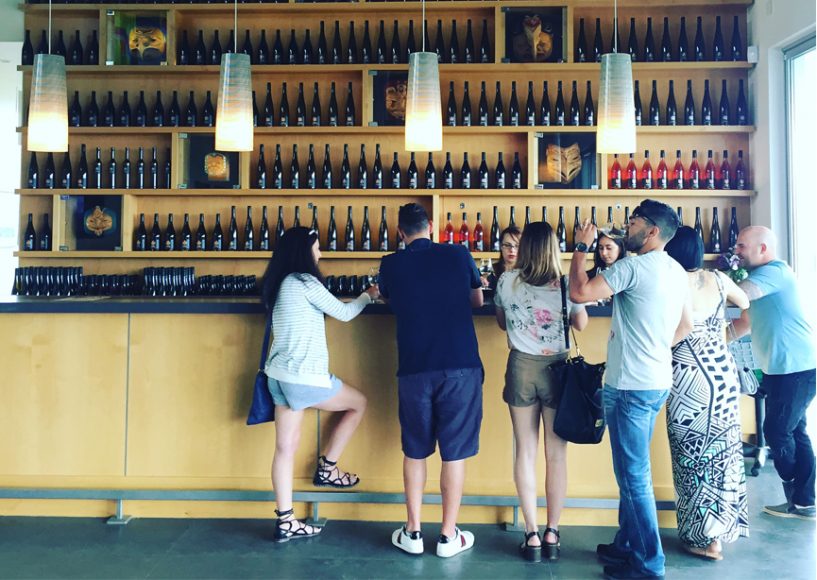 Having a taste of Riesling at Tantalus Vineyards on a Kelowna Wine Tour.

It’s hard to talk about Riesling in the Okanagan Valley without mentioning Tantalus. These guys have reliably produced some of the tastiest Rieslings in the valley, year after year! They boast five different styles of Riesling, all grown on their single vineyard in Kelowna.

The crown jewel of these is their Old Vines Riesling, made exclusively from blocks planted in 1978. This wine has bracing, limey acidity, mad concentration of flavour, and a seriously long finish.

The 2013 is drinking well now (warning: it will likely be sold out by the end of the month!), but I’m looking forward to opening the 2005 that I’ve got in my cellar!

CedarCreek was one of the original eight wineries in British Columbia. They make three different Rieslings (all excellent) from their home vineyard on the Eastern shores of Okanagan Lake.

Try their Platinum Block 3 Riesling, which is sourced from a single block planted in 1991. This super rich, textured Riesling was fermented in stainless steel and some oak foudres (large oak vessels). Coming in at around $18 after tax, their estate bottling is crisp and refreshing and a total bargain.

Their Riesling Icewine is as good as any I’ve tasted from the Okanagan.

Enjoying the view over a picnic at Kitsch Wines in South Kelowna.

The new guys on the block in East Kelowna, Kitsch Wines is making some super tasty Riesling! Situated in the garage of a 12,000 square foot mansion perched above KLO road, they also have one of the best views in the valley.

Their Riesling is slightly off-dry in style and reminds me of a basket of freshly picked Okanagan orchard fruit! Think peaches, apricots, pears, and green apples. It’s dangerously easy to drink… Or, to borrow from Okanagan Crush Pad’s David Scholefield, “Pairs well with fresh air.” That means drink it outside on a patio!

This Summerland winery earned its name from the fact that the winemaker, Bernd, represents the eighth generation of the family wine business. Their family winery, Weingut Shales started in 1783. With a desire to start a project on his own, he and his wife Stefanie moved to Canada to start 8th Generation.

These guys make three killer Rieslings from their vineyard in Okanagan Falls. The Riesling Selection is their top wine, a dryer Riesling made from wild fermented grapes. They also make two estate labelled rieslings, Riesling Classic is the dryer of the two, the other is simply labelled “Riesling.” All are worth tasting!

Firing up the wood burning oven to cook pizza at Orofino Vineyards!

John Weber, a former school teacher from Saskatchewan, and his wife, Virginia, make some incredible single vineyard Rieslings in the Similkameen Valley, a Western neighbour of the Okanagan.

Although it’s about an hour and 45 minutes south of Kelowna, and generally quite a bit warmer over the course of the season, flavour-wise the Rieslings are similar to the Rieslings in East Kelowna. They’ve got great freshness, serious acidity, and a salty minerality to them. Orofino makes three different outstanding single vineyard Rieslings called the Home Vineyard, Scout Vineyard, and Hendsbee Vineyard.

Little Farm Winery owner Rhys Pender leading us on a tour through the vineyard in the Similkameen Valley.

This is a small gem of a winery farmed by one of the few Masters of Wine in Canada, Rhys Pender, and his wife, Alishan. They only make three wines and grow two grapes on their small Cawston acreage. Their three acres show how appropriate their choice of name is… It is indeed a Little Farm.

Picked slightly earlier than many Rieslings, theirs has lightning acidity, tension, and minerality! There’s only a couple hundred cases of it, so get it while it lasts.

A taste of fresh pressed 2015 Riesling juice at Synchromesh Winery.

The Dickinson family make several very serious Rieslings in Okanagan Falls! Synchromesh Winemaker Alan strictly uses wild yeast to ferment the wines, which seems to be a bit of a trend with many of the Rieslings in the valley. These guys use completely sustainable farming and winemaking techniques.

Their Stormhaven bottling could age for decades! In fact, I bought some of the 2014 bottling to drink with my son when he’s of legal (or close to) drinking age. He turned two this year, so I’m going to have to hide it somewhere deep in the back of my cellar to avoid temptation!

Clearly, Riesling is a delicious white wine with a variety of styles and flavours. It's versatility makes it suitable for pairing with any meal of the day, even breakfast!

Did you change your mind about Riesling after a BC wine tasting?

What's your favourite BC Riesling to share with friends?