What Makes the Okanagan’s Climate Unique?

Okanagan Wines vs The World

People often ask me how our wines stack up against international wines. What do I tell them? I feel like the best examples of Okanagan and Similkameen wines can go toe-to-toe with any region in the world at their respective price points. Yep, our wine is awesome!

I was scrambling to pour eight glasses of wine each for 60 thirsty tasters… A total of 480 glasses of wine! I had eight different wines that I had chosen, wrapped tightly in paper bags so that the identity and origin of these wines remained a mystery. The theme for the event I was putting on was “BC vs The World.” For this blind tasting event, I had chosen a pair of wines - a local wine and an international wine - to square off in a wine tasting showdown.

I had selected wines from some of British Columbia’s standout varietals: Riesling, Chardonnay, Pinot Noir, and Syrah. I wasn’t going to let the BC wines off easy. I made sure they had world-class competition: Riesling from the Mosel Valley in Germany, Chardonnay from the Russian River Valley in California, Pinot Noir from Burgundy in France, and Shiraz from the Barossa Valley in Australia. All of these regions are world-renowned for crafting some of the best examples of wines made from these grapes. 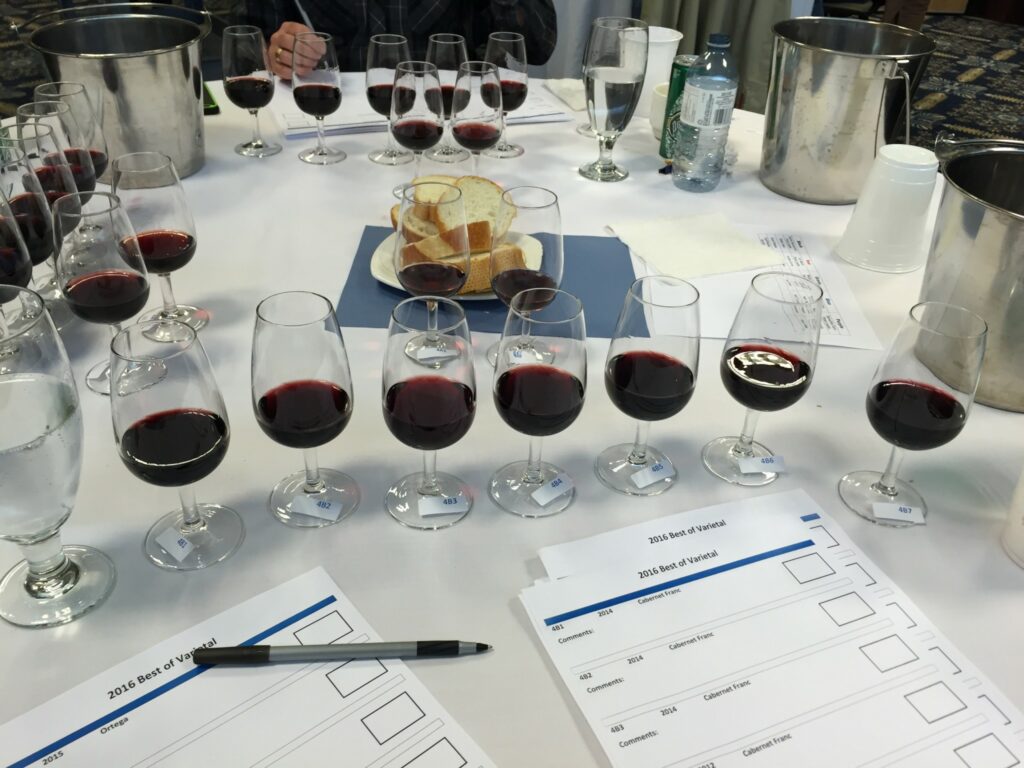 Could you tell the difference between BC wine and other regions in a blind tasting?

The tasters had no idea which wine was local or international. I guided the group through the tasting, two wines at a time. Riesling vs Riesling, Chard vs Chard, and so on. After each pair, I asked the crowd which wine they preferred by a show of hands. Wine One or Wine Two?

In each case our local wines came out on top! I was excited, but not surprised. As I said before, BC wine is awesome!

One of the reasons why our wines are so awesome is our distinctly unique climate. 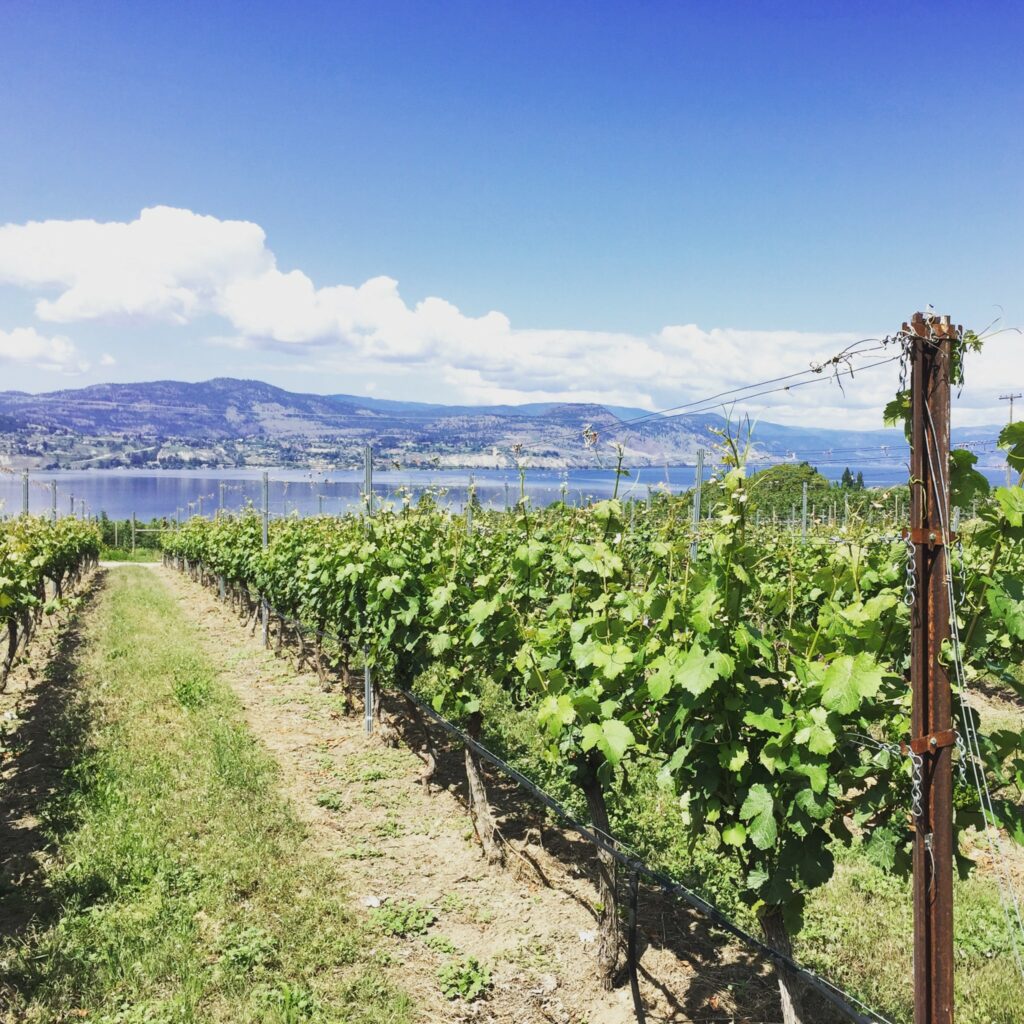 Another beautiful day in the Okanagan Valley!

You would think being in Canada, high up in the northern hemisphere, would make the Okanagan a cool climate wine region. Other wine regions at this latitude (just shy of the 50th Parallel), like Champagne in France and the Mosel in Germany, are some of the coolest (pun intended) wine regions on the planet. Although we share similar latitudes with these growing regions, we are quite different! For example, it would be rare for temperatures to exceed 30 °C  in these areas. In the Okanagan, the locals get upset if it isn’t at least 30 °C  in July and August!

It is due to these hot summer days that we are able to grow such a diverse array of grape varieties. Even grapes that love longer, hotter growing seasons, like Viognier and Syrah, thrive here.

Being so far north means the grapes benefit from tonnes of sunshine hours in the peak of our growing season. In the end of June, our vineyards are soaking up sunlight shortly after 5 AM and still basking in its rays after 9 PM! In the peak of the growing season, we actually get roughly two hours more sunlight per day than they do down in Napa! Despite our northern latitude, we have a relatively hot, compressed growing season.

One of the biggest benefits of our high latitude is that we see a massive diurnal shift, which is the difference in temperature at the coolest part of the night versus the warmest time of day.  That is a very important factor for the quality of our wines because it allows our grapes to ripen slowly into the fall, preserving the natural acidity in the fruit.

Yes, it does get chilly in the winter and we do see some snow. This is another beneficial factor for us though, as it allows the grapes to go through full winter dormancy. Grape vines require this dormant period as part of a healthy life cycle. It allows them to fully shut down over a couple of months before re-awakening in spring.

Other Climate Characteristics of the Okanagan Valley Wine Region 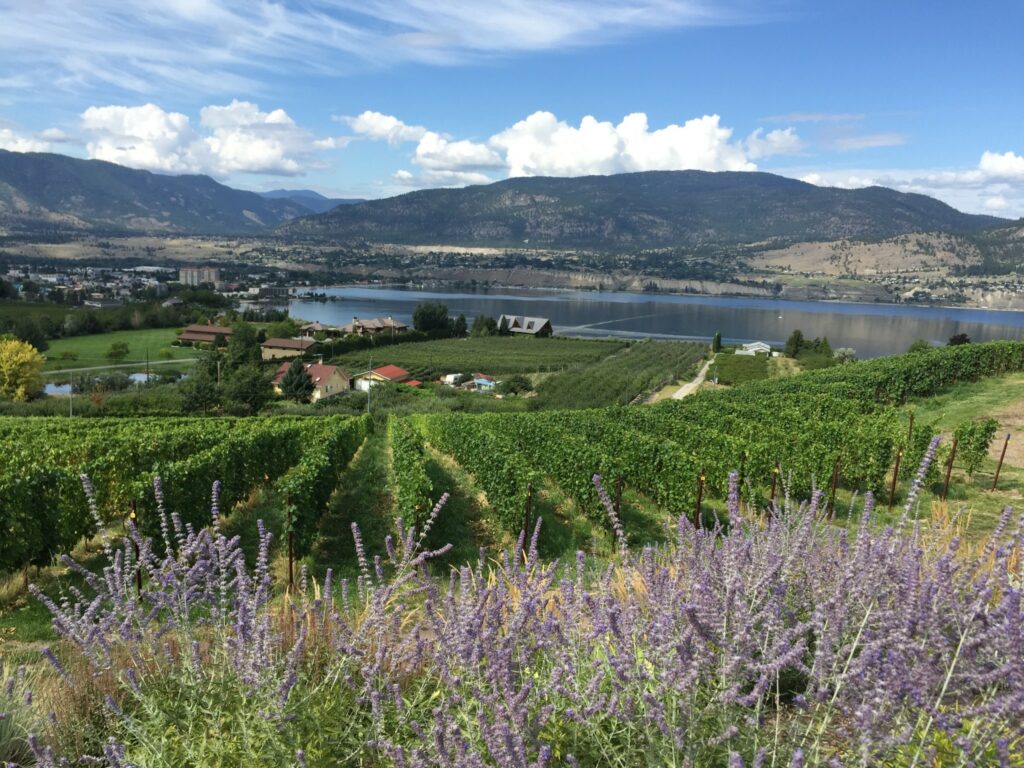 Lucky for us, most wineries have air conditioning - the Okanagan is HOT!

The Okanagan is dry. This is due to the Coastal Mountain Range, which creates a rain shadow that blocks or diverts the majority of the rainy weather systems from reaching the Okanagan. This is why Vancouver and the Lower Mainland get about 48" of precipitation a year while here in the Kelowna area we get about 16" a year. Meanwhile, Oliver and Osoyoos, Canada’s only arid desert, receive roughly 12" a year!

Although you can drive from the vineyards in the northern end of the Okanagan in Lake Country down to the vineyards in Osoyoos in two hours, the growing conditions change considerably. The growing season in the southern end of the valley is about three weeks longer. The temperature can be about 5 °  warmer on any given day in the peak of summer. These differences in temperature account for the wide variety of different grapes we grow in the valley.

In the North Okanagan, we tend to focus more on varieties that require less heat and a shorter growing season. Lake Country, Kelowna, and West Kelowna are excellent areas for growing Riesling, Pinot Gris, Gewürztraminer, Chardonnay, and Pinot Noir.

The further south you go in the valley, the warmer it becomes and, more importantly, the longer our growing season is. This is why most of the best Syrah, Viognier, Cabernet Sauvignon, and Cabernet Francs are generally grown in the southern end of the valley.

Climate plays a huge part in determining which grape varieties can produce exceptional wines. The Okanagan Valley’s unique climate enables winemakers to produce amazing wines that can stand beside the world’s top wine regions, all while producing a wide range of varietals and shattering past assumptions about our latitude.

Okanagan Valley wineries aren’t just growing grapes that “should” be grown at our latitude, based on other regions. They’re experimenting with lesser known grape varieties and taking advantages of small pockets of distinct climate variations. From north to south, east to west, and everything in between, vineyard managers are discovering which varietals will do best in our young but thriving wine region.

Have you compared Okanagan Valley grape varietals by region?